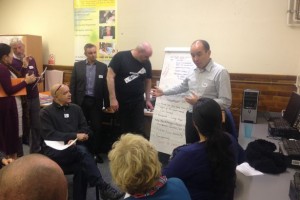 30 people got together in a crowded hall in Liverpool to consider Growing Inequality in Britain and How to Turn the Tide Against It. Hosted by the Workers’ Educational Association and Toxteth TV, it was one of a series of Talk Shop events in Toxteth leading up to the 2015 General Election.

After getting to grips with some of the facts around the situation, the facilitators offered five solutions including imposing a maximum salary alongside a living wage, converting to a green economy, and devolving power into the hands of local people. People got together around each option to debate the pros & cons. Soon some horse-trading began as options were joined together. Eventually (and unusually) all the options were combined into one, for which there was overwhelming support.

From the feedback we always collect, 96% said the discussion was ‘very’ or ‘fairly constructive’, whilst a similar proportion reported that they felt ‘very safe’. Bernie Kennedy – a WEA Tutor Organiser – said “My political thinking evolved a lot during the event. Towards the end I found myself making an impassioned speech, and I thought to myself “where did that come from?”. Someone else tweeted the event was “generous and playful”, and local councillor Barry Kushner commented “If this was more common, and people were able to engage with the issues, it would be much healthier for our democracy.”

You can see edited highlights of the event on YouTube, and a report from the Liverpool Echo.