The ‘democracy sector’, define it as you will, has not been able to lay a glove on the Brexit brawl.

The 2017 Citizens Assembly on Brexit, organised by the Constitution Unit at UCL and others, was a noble effort, but I detect little impact.

This is little surprise. My own website, Open Up, helped people work out what they thought about the referendum – but there were far fewer people who wanted to take a rational approach than I had reckoned. Parliament itself went down the rabbit hole and entered Wonderland with the Brady amendment in late January. This called for the Irish backstop to be replaced by “alternative arrangements”, totally undefined. Choose your own fantasy highlight.

Lewis Carroll, by the way, seems to have seen it coming. The White Queen was able to “believe as many as six impossible things before breakfast.” Humpty Dumpty told Alice, “When I use a word, it means just what I choose it to mean – neither more nor less.”

But my shame and revulsion – shared by many – cannot stop us from doing what we can. To that end, I wish to make a Modest Proposal.

My point of starting is that the EU referendum and its aftermath has emphasised and exacerbated differences. In 1954, the Irish essayist, Hubert Butler, wrote that in time the issue of the Irish border “might become meaningless and drop off painlessly like a strip of sticking-plaster from a wound that has healed, or else it will survive in some modified form as a definition which distinguishes but does not divide”. We’re a little behind on that one.

In a simple-minded way, it seems to me that the best response to this is to identify and point out similarities. How do we do this? In our context, a strong candidate is a platform called polis.

Here’s how it works. Polis asks people to make and rate statements. It then uses machine learning to create clusters of people with similar attitudes, and to show which statements command the most support across the clusters. It does so using easily understandable diagrams like this: 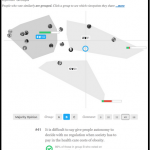 It’s best known use is in vTaiwan, developed by the government  to crowd-source legislation. The ‘v’ stands for virtual. vTaiwan has evolved: in the words of one article: “Once vTaiwan deployed polis, participation scaled a hundredfold [and]  the complexity of issues grappled with increased.”

vTaiwan was used in 2016 to decide what to do when Taipei city’s Taxi drivers surrounded the ministry of transport in protest against Uber. Polis pointed the way, because it encourages people to suggest statements that command agreement, especially agreement among both pro- and anti-Uber camps. The first statement that achieved this was that taxis no longer needed to be painted yellow. This is relatively trivial, but it showed that agreement was possible.

Later, the following statement got 95% agreement across the board:

The government should leverage this opportunity to challenge the taxi industry to improve their management & quality control system, so that drivers & riders would enjoy the same quality service as Uber.

The government pledged to turn the consensus items into a new regulation. This for example said that high-end app-based Taxis were free to operate, as long as they did not undercut existing meters.

We could use polis or a similar platform to explore wider questions of identity as well as Brexit. For the former, we have something to build on: Grayson Perry says that leavers and remainers share a liking for Marmite, blue, tea and David Bowie.  But, if we are to have an impact, a goodly chunk of our sector needs to be involved.